In March 1986 a small group of committed parents joined together with Isabelle S. Schuessler, former Head of St. Patrick’s Episcopal Day School in DC, to establish Washington Episcopal School. Under the inspired and visionary leadership of its Board Chair, Robert E. Freer, Mrs. Schuessler, along with Dorothy McSweeny and other founders, the school grew and prospered. The school opened its doors to 90 students in September of that same year in a temporary space in the basement of Pilgrim Lutheran Church on Massachusetts Avenue in Bethesda, Maryland. The school moved in 1987 to its present site in Bethesda, convenient to Washington, D.C. and Northern Virginia. Enrollment grew steadily and a Middle School (Grades 7 and 8) was added in 1995. The unique, exciting study trip program, which sends older students to Utah, Italy, France, and Spain was developed as an important component of the academic program, and included in tuition. With increasing enrollment came the need for bigger and better facilities. After a successful Capital Campaign, WES completed a comprehensive building program that transformed the campus. Watch our video featuring WES’s founding.

The community at WES is extraordinary: the students are kind and eager to learn; the parents are caring and supportive; and the faculty and staff are committed to providing each child with the best education possible. I cannot say enough about my outstanding colleagues. This is a very special place to be a teacher as well as a student, and I look forward to each new day at WES. 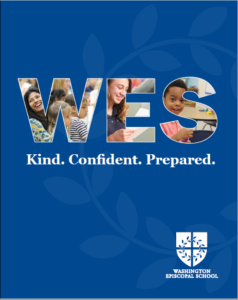 We provide Nursery to Middle School students with balanced, formative learning experiences that lay a strong foundation for future academic growth. Instilling integrity and compassion, we nurture the personal development and positive wellbeing of each child as a person of individual gifts. Our students thrive as valued members of our inclusive community.

Our graduates forge fulfilling lives of purpose and meaning.
We warmly invite you to learn more about the character, curriculum, and community of our school. The overview provided in this viewbook is a great place to start. We encourage you to continue your journey of exploration by scheduling a campus visit to better experience all that WES has to offer.